The evening began with a series of short films that address such issues as male prostitution, sex and disability and, in Wham, Bam, Mr Pam, the challenges of being a successful female film maker in the male dominated world of gay pornography.

The audience were then treated to a reading by Manchester poet Adam Lowe before being given access to the world of so-called slamming parties with a screening of William Fairman and Max Gogarty’s feature-length documentary Chemsex. Chemically fueled sex parties, which sometimes last for days, are a trend with which a number of gay men are becoming involved, particularly in London and other major cities. With new cases of HIV on the rise, these parties, many of which are organised online through apps such as Grindr, are a potential cause for alarm amongst sexual health professionals.

The film in unflinching in its depiction of these issues, as it follows slamming party enthusiasts, such as Andrew, Miguel, Enrique and Simon, through a series of drug-fuelled encounters, psychotic episodes and comedowns. To these men, sex and drug-taking have become synonymous and particularly troubling are their stories of deliberately becoming infected with the HIV virus. Once they become ‘pos’, the men no longer have to worry about the risk and are thus able to have sex with men who are already HIV positive. As Andrew says of HIV, “It comes with the territory.” 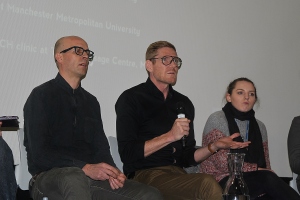 In the film, David Stuart, Substance lead at London sexual health clinic, 56 Dean Street, works with some of the men involved with chemsex, attempting to find the reasons behind their risk-taking behaviour. In many cases, David believes, the reasons behind slamming parties are complicated and can lie in the sense of isolation and low self-worth that a gay man often experiences in his childhood and teenage years. As one slamming party enthusiast says, “For days you get to feel that you’re worth something.”

Asked about his reasons for screening the film, Jamie told Humanity Hallows, “Chemsex is a very powerful documentary and it’s important that the LGBTQ community are included in discussions about sex.” 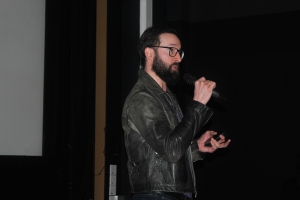 Regarding the subject of the film, he added, “Chemsex is not just about gay men who want to be promiscuous. It’s deeper than that and, by showing this film, we can help people develop a deeper understanding.”

The event also included a Q&A session chaired by Maurice Nagington from the University of Manchester. The panel was comprised of David Stuart, along with Staff Nurse from Manchester’s REACH clinic Rebecca Evans, Manchester Met Senior Lecturer in Philosophy Dr Phil Hutchinson and Senior Lecturer in Criminology Dr Rob Ralphs. Issues addressed in the session included the importance of education and the risk of making the gay community feel stigmatised.

Audience response to the film was positive, one audience member describing Chemsex as “brave and honest.” There was also general agreement that the reasons behind participation in chemsex parties ran deep, one man commenting that with the recent legalisation of gay marriage, “We should feel happy and we should feel connected and, on paper, we are.”

For more information about upcoming events in the SEX strand, see the Humanities in Public webpage.

The Reach Clinic is a free and confidential service for people in Manchester who use drugs during sex and need support or advice. Open every Wednesday 3.30pm to 6pm. Walk in or make an appointment. Tel: 0161 276 5204. Email: reach@cmft.nhs.uk